With 600 antique, classic and retro cars worth more than a billion US dollars on display, it was billed as “the ultimate Auto experience”.

Brave call, considering California also hosts that other modest annual car event up the coast. Where’s that one at again? Ah yes, Pebble Beach. Every August.

But this was late January and despite balmy sunshine from clear LA winter skies, it was an indoor event. The inaugural LA Classic Auto show turned the vast, high-roofed clear-span 720,000 square feet of floor space in the LA Convention Centre, on South Figueroa St in downtown Los Angeles, into one giant dream-filled car park. It’s a commendably inclusive and thoughtful complex this, even boasting “a breast feeding-friendly facility with two lactation rooms for nursing moms”. But I digress.

Petrol-head TV personalities who couldn’t stay away included the venerable Wayne Carini, from Chasing Classic cars; Chris Jacobs from Overhaulin’, along with his creative sidekick, visionary automotive stylist Chip Foose; Mike Brewer from Wheeler Dealers; Mike Phillips from Competition Ready; while the quaintly-titled Bitchin’ Rides delivered Dave Kindig for this shindig. (I’m betting Dave gets lame wordplay like that on his surname all the time, but his company name is even lamer: it’s called “Kindig-it Design”).

I managed to drag my 25yo LA-resident son Oliver along – he’s a Hollywood actor, but certainly no petrol-head (he drives a not-too-tidy Nissan Maxima). We rocked up at 9am on Sunday morning, the last day of the 3-day event, as soon as the doors opened. Smart move. We walked into the auditorium and saw immediately that, at this early hour, the crowd was mercifully sparse. But not for long.

The first display inside the door was by the Thunderbird Club. We immediately fell into conversation with an amiable good ole boy whose wife owned an immaculate 1956 T-bird she’d had the foresight to snap up way back in 1967. Another guy told us he had punted his 68 T-bird all the way down the highway from Washington state, safely negotiating snow and icy roads to be here. Sadly though, there was no example on show of my own favourite T-bird, the bullet-nosed 1962 model. Mwah!

Moving along, we browsed a modest but creditable Jaguar display, dominated by the unmistakably jaunty lines of several Jag XK coupes from the 1940’s and 50’s. There was also an outstanding 1952 C type replica (the real ones are worth $13.2 million). But it was a couple of E types which immediately caught my son’s eye.

From here though it was choice shock: which direction to head first? Mustang alley beckoned. The appeal of the original pony car was reflected in the dozens of immaculate examples on show from across the decades, in two long shiny rows. These, and a similar number of Minis, comprised the exhibits with the greatest number of vehicles from single marques. 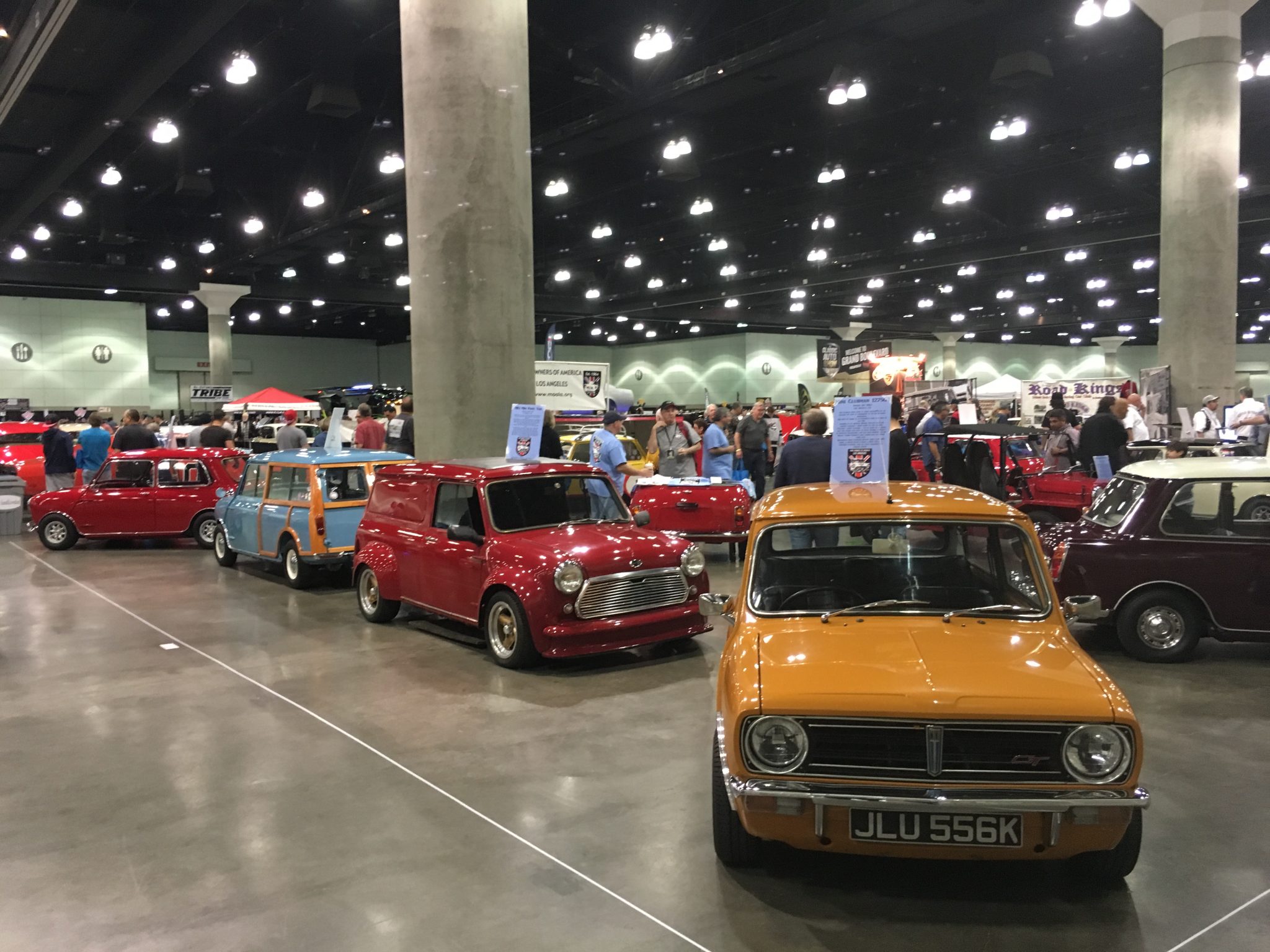 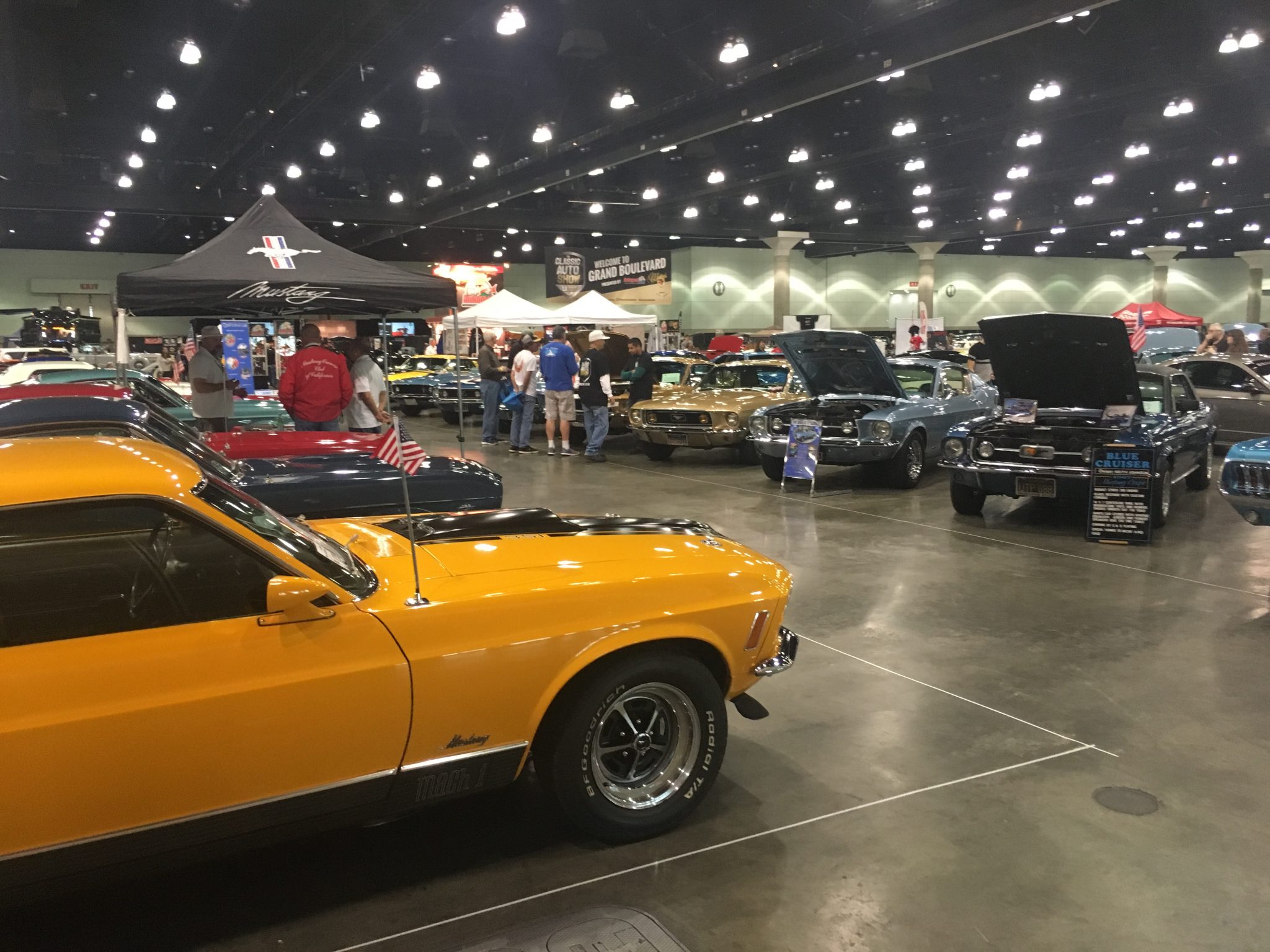 At the end of Mini arcade we were confronted by a spectacular 1941 Chrysler Town and Country Barrelback: a Woodie van, French polished to perfection. Only 15 of these units remain, from an original production run of just 600. This one was topped with an equally gleaming inverted canoe. Inside the tailgate was a selection of picnic accoutrements, right down to the blanket and an antique portable radio.

Whenever I see a Woodie, it immediately triggers recall of a pop lyric from my childhood which, as I grew older, seemed vaguely pornographic: “He’s got a green surfboard and a Woodie to match, and when he’s riding the waves, man is he hard to catch!” (From a sixties song called Surfer Joe, by Beach Boys lookalikes, the Surfaris.)

This lyric confounded me when I was young. It wasn’t until decades later, when I first watched Chasing Classic Cars, that Wayne Carini revealed to me what a Woodie actually was. In retrospect, as a child I do recall seeing examples of little Morris Minor station wagons with timbered exo-skeletons. Which triggered a whole other level of puzzlement when I later discovered that the English term for these wagons was, inexplicably, “shooting brake”.

We headed down a promenade of auto exotica, past a 1956 Austin Healey 100, a 1963 split-window Corvette Stingray and a low-slung, extremely wide Toyota race car. Oliver remarked on just how low and close to the floor this race car sat, adding dryly “Oh what a feeling”.

His comment invoked recall of an episode from the late 70’s, when I owned a 246 Dino Ferrari. Red of course. One day I took my buddy Rick Kimberley for a blast around Albert Park Lake in Melbourne, long before it ever became an F1 race track. We hit… um, an outrageous speed and Rick, who owned one of a small handful of Phase 4 Falcon GTs at the time, shifted uncomfortably in the passenger seat inside the tiny cabin of my Italian projectile.

“What’s the matter?” I challenged him. “You’ve been this speed before.”

“Yeah,” replied Rick. “But never with my arse dragging on the ground!”

That’s low. But back to the show… 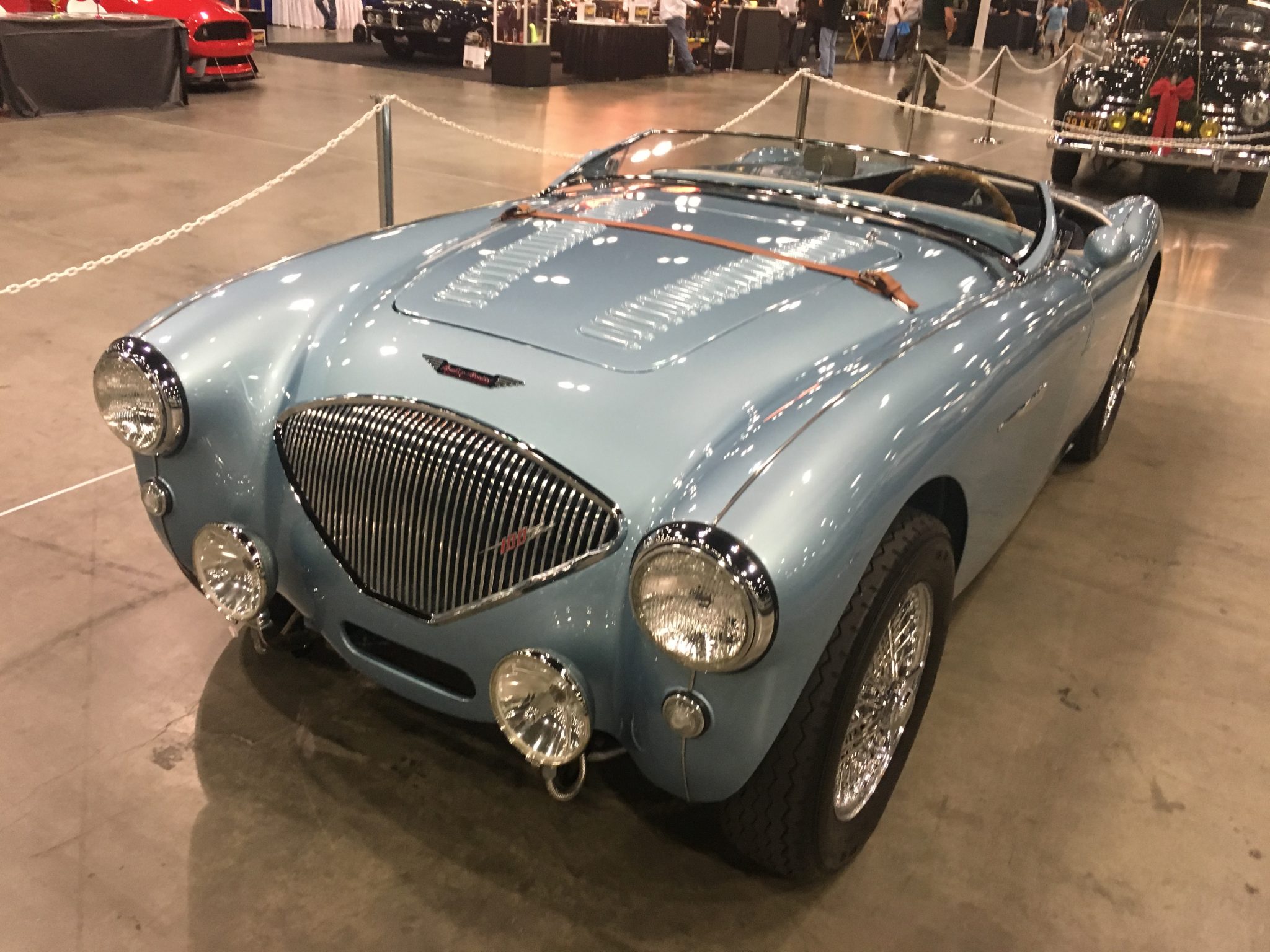 There was the obligatory Mercedes Gullwing of course. Oh, and a superb twin-headlight 1960’s silver Maserati, with a front end that just smiled at you so beguilingly it seemed to say “I know you want me, but you know you’ll never have me.”

The most valuable vehicles in the exhibition were all clustered together in a semi-circle at the end of the promenade. The standouts were a pair of Rolls Royces from the 1920’s. They couldn’t  have been more different.

The first was billed as a “1925 Phantom 1 aerodynamic coupe by Jonckheere”, reputed to have been owned by the Duke of Windsor (the monarch cad who abandoned the British throne for that ghastly American divorcee Wallis Simpson). His Rolls later passed to the impressively-titled Rajah of Nanpara. But it was the next owner who despatched it to the Belgian coachbuilders, apparently with instructions that it be made “more aerodynamic”.

Due to an absence of wind tunnels in those days, what he got back was an elongated swoopy sculpture with round doors, an elaborately sloping tail that you could ski off in winter (provided you managed to avoid castrating yourself on the vertical fin). And a sloping radiator which looks like it’s been blown backwards.

The other Rolls was far more sedate and dignified. It was a 1927 Town Car, previously owned by Fred Astaire.

Making a grand entrance must have been important to Fred, because apparently he trundled this car between London, New York and Los Angeles with the express purpose of making grand entrances to theatre events of the day. Can’t you just see him, in his top hat, emerging triumphantly from the cabin with a fair maiden, waving airily to adoring onlookers?

The Town Car design, with enclosed cabin at the rear, exposes the hapless chauffeur to the elements. It’s an inordinately class-conscious layout, reputedly inspired by the agricultural simplicity of the horse and cart. Said hapless chauffeur received his instructions via a horned tube, held to his ear, direct from the passengers.

Next came a display featuring a mobile home so large that it could have been strata-titled into a block of apartments. Adjacent to this was a small but perfectly formed pod of De Tomaso Panteras, a coupe which enjoyed two decades of production in the 70’s and 80’s.

I have always thought of these as the consummate marriage between Italian elan and American muscle, designed by Ghia and powered by tough Ford Cleveland 351 V8 engines with 4 bolt main bearing caps. The growl emitted from the rear was far more distinctive than the note from any Falcon GT of the time. Such was the brutal performance of the Pantera that it was known in Australia as the “Pants Tearer”.

Along from this display was an extensive homage to the wallowy, big-finned American luxo-barges of the 50’s and 60’s… the Chevrolets, the Cadillacs, the Oldsmobiles, the Buicks. All of which reflected the glorious post-war optimism and growing prosperity of the time.

There was a lot more, but I have exceeded the limit. My 1000 word limit, that is.

As we walked out of the LA Convention centre after 3 hours of browsing, Oliver asked:  “So if you could have any one of those cars in there, just one, which one would it be?”

I didn’t hesitate. “Oh, I’d go for the Pants Tearer. Definitely. You?”

Indeed it is. And it’s nice to know that even non-petrol-heads can be moved by elegantly classic automotive design that ages so well. 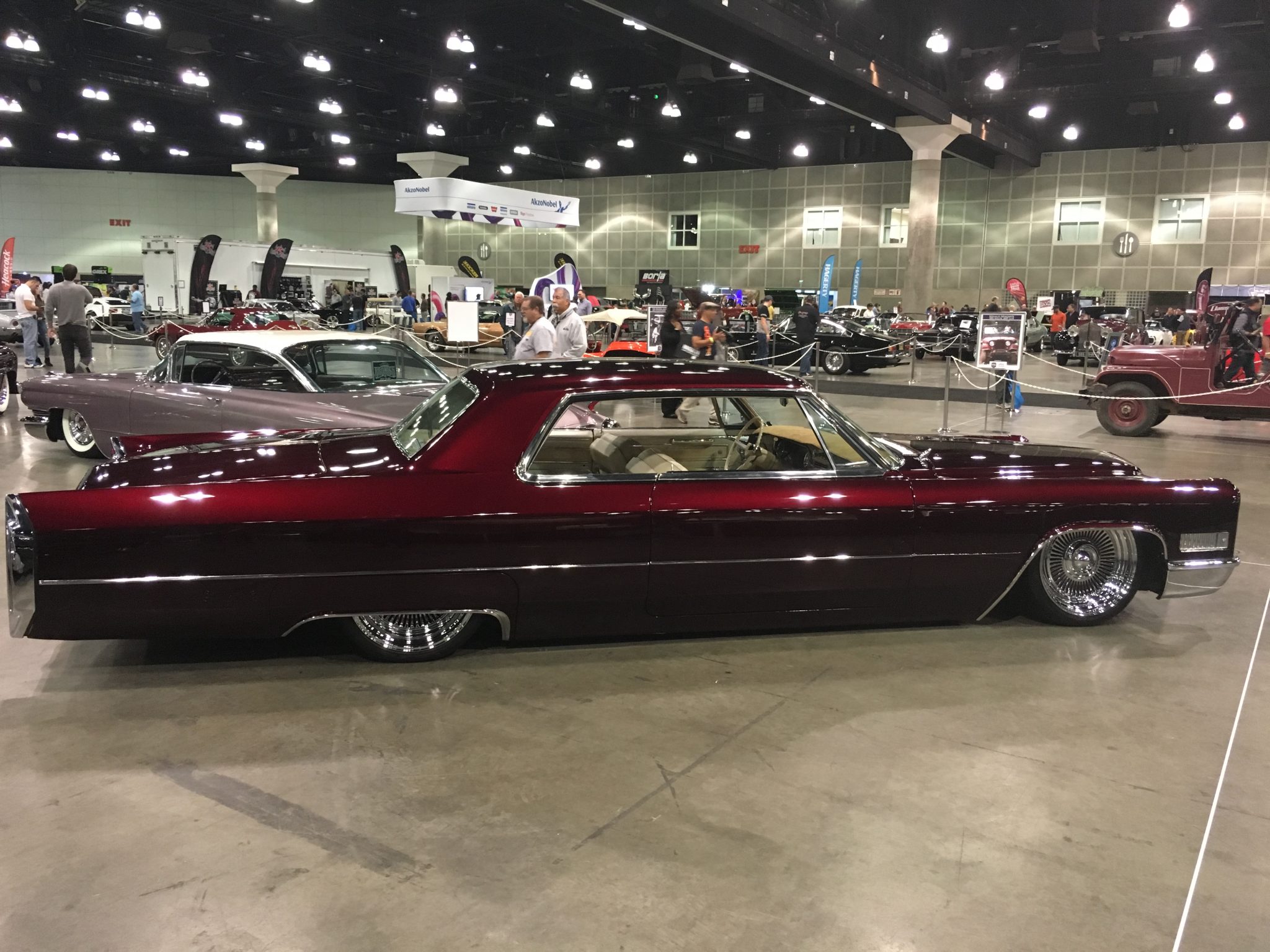 Julian Smith is a Writer, Director, communications consultant, mate of Brian Tanti and a refugee from Advertising. www.filmcommunication.com